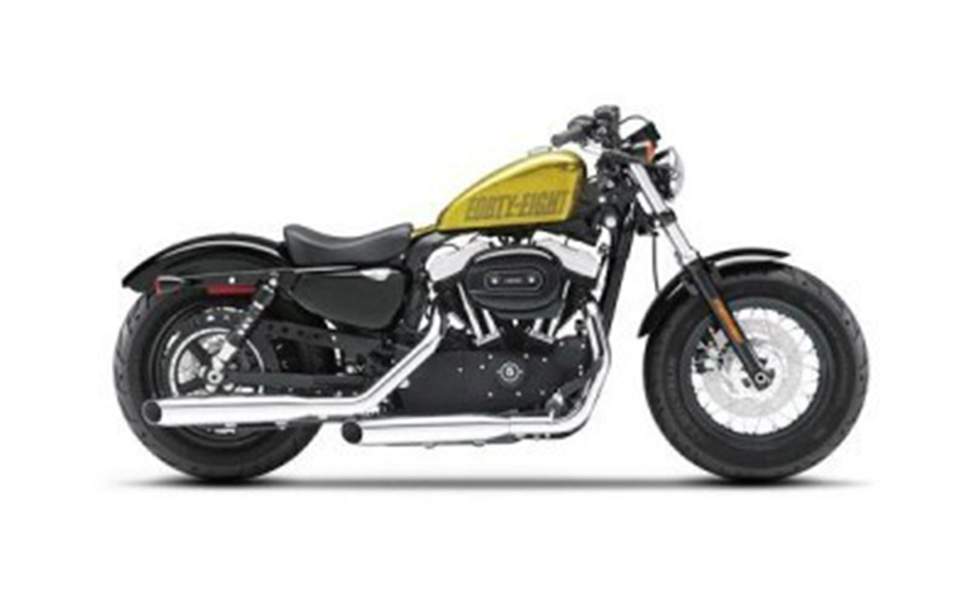 Harley-Davidson Forty-Eight – All You Need To Know

We all know what Harley Davidson is capable of making some fantastic machines, and while 7.9-litres of fuel tank capacity may not sound like much, the Forty-Eight is bike a lot of Harley enthusiasts love. The motorcycle gets its name from the year this motorcycle manufacturer designed its first ‘peanut’-shaped fuel tank. This design trend continues even today on all Harley-Davidson’s Sportster motorcycles.

The Harley-Davidson Forty-Eight has a lovely, low-slung silhouette and that slender front fender looks great up-front. It’s almost impossible to ignore the massive front tyre on this bike; we love the classic turn signals, the chrome-ringed headlamp and the single-pod speedometer. Harley Davidson Bikes haven’t included a fuel gauge though. The Harley-Davidson Forty-Eight features rear-view mirrors that are placed under the handlebar, sprouting up from below. The palm grips feel good to hold and the brake levers feel solid. The ignition switch is located beneath the bike’s steering column. The quality of the switches feel good but take a little getting used to. If you switch on the indicators, it self-cancels after the turn. Also, you cannot switch the headlamp off on the Harley-Davidson Forty-Eight. The fuel tank gets a nice chrome filler lid. Harley Davidson Bikes haven’t forgotten to include lots of chrome, twin exhausts while the suspension at the back is positioned near the Forty-Eight’s toothed drive belt. The side panels are positioned below the thin seat padding. The panel on the right side features a chrome knob, popping up when pressed revealing an oil dipstick. At the back, it gets a broad fender and simple indicators. A pillion’s seat can only be had as an option. The bike is built beautifully and oozes quality.

The Forty-Eight is powered by a 1202cc, four-stroke, V-twin and air-cooled engine. The bike uses a toothed belt to send power to its rear wheel with the engine responding well to acceleration inputs. Mated to the engine is a 5-speed transmission that shifts in a one-down, four-up pattern, but the clutch has a bit of weight to it. The motorcycle pulls strongly from the lower reaches of the powerband with the exhausts sounding like a typical Harley. What we don’t like is how the heat from the engine can felt on the rider’s thighs, particularly in traffic. The bike feels best when it cruises along a little over 100kph, and in fourth gear, you can reach a top speed of 150kph, and it doesn’t get breathless at this point. The Forty-Eight gets a conventional frame and suspension in the form of telescopic front forks and rear twin shocks. However, the ride is a bit stiff and that means you can feel almost every undulation. The handlebar is wide and the foot pegs that are set ahead don’t make for the best riding position because your arms and limbs feel a bit too stretched, and this comes in the way of comfort on long distance journeys. Customising this bike, however, is going to cost you a fair chunk over the standard price.

The Harley to buy?

In a straight line, the Forty-Eight stays glued to the tarmac. The bike doesn’t corner too well, and the ground clearance comes in the way when you tip into a corners. The bike features disc brakes at the front and rear and the brake levers have a feel-good factor about them. It manages a fuel economy figure of 20kpl, but the fuel tank capacity could’ve been better, improving the range of the bike. We wouldn’t consider this bike to be one for long distances, but its compact design and slow-slung stance are irresistible. It’s also one among the most affordable Harley-Davidson Bikes you can buy in India, and given its legacy, why wouldn’t you?