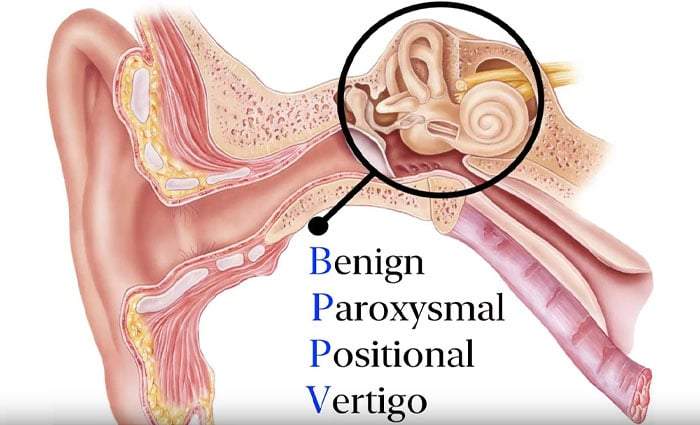 What is Benign Paroxysmal Positional Vertigo(BPPV)?

Benign Paroxysmal Positional Vertigo, also known as BPPV Vertigo or simply BPPV, is a type of Vertigo caused by an issue with the inner ear.

BPPV makes the patients feel as if the room around them is spinning or that their surroundings are moving.

The specifications & the characteristics of BPPV can be ascertained by its name.

-Benign, implies that the condition is not very serious in nature & isn’t an immediate cause for concern among patients.

-Paroxysmal, implies that the symptoms appear suddenly, without warning, & are usually short lived in nature.

-Positional, implies that the symptoms are triggered by certain sudden movements of the head and affect the positioning of the body in space.

-Vertigo, implies that the condition is a type of Vertigo; a disorder in which the patient feels unbalanced, disoriented, dizzy, & nauseous. These symptoms can be triggered by certain head movements, or can appear without any visible triggers at all.

BPPV is quite a common condition, & almost 80% of patients with BPPV Vertigo suffer from it.

BPPV Vertigo is an easily treatable condition, & can be treated in a doctor’s office.

Benign Paroxysmal Positional Vertigo is rarely a serious condition, however, it can cause serious injuries & even fatalities if the patient happens to get dizzy in the middle of an important activity.

BPPV symptoms can occur or can be triggered by certain head movements. Although the exact symptoms experienced can differ for each patient, some of the most common symptoms include:

Patients can often find out which of the two ears is affected by BPPV Vertigo with a simple test.

The inner ear houses the body’s balance system, also called the vestibular system. Inside the inner ear are tiny rocks or crystals of calcium called otoconia, which generally reside in the middle ear. However, they can break loose & get lodged inside the inner ear.

Since these calcium crystals are sensitive to motion stimuli, they cause problems with the body’s balance when they get deposited in the inner ear.

This is what causes BPPV patients to feel dizzy & unbalanced whenever they move their head in certain ways.

In addition, some movements like the few mentioned below can also cause BPPV symptoms:

Another common symptom of BPPV is rhythmic, uncontrolled, & repetitive eye movements, also called nystagmus. It is the first symptom your doctor will look for when trying to diagnose if you indeed have BPPV or not.

Additionally, certain other conditions can also cause BPPV Vertigo. These include:

BPPV diagnosis is carried out using a general health questionnaire & by studying your symptoms.

Physical Examination: Your doctor will look for certain physical signs of BPPV Vertigo like nystagmus, etc. The presence of nystagmus is a definitive indication of BPPV Vertigo in a patient.

They may also try moving your head in certain directions to determine if you feel dizzy during any of those movements.

Your doctor might also order certain tests to determine if you indeed have BPPV. These tests include:

BPPV Vertigo is usually an episodic condition, which means that the attacks come & go, & are usually not harmful in nature.

However, if & when this condition starts interfering with your daily life, you should seek out treatment.

BPPV Vertigo treatment usually involves certain exercises that help reinstate the dislodged calcium crystals from the inner ear back to their original position.

Usually, one or more of these exercises are able to give the desired results to the patient.

These exercises should be performed multiple times a day, & two to three days in a week for maximum benefit.

In case none of the exercises work for a patient, the condition is treated via surgery. The displaced calcium crystals are surgically removed from the inner ear & reinstated to their original position in the middle ear.