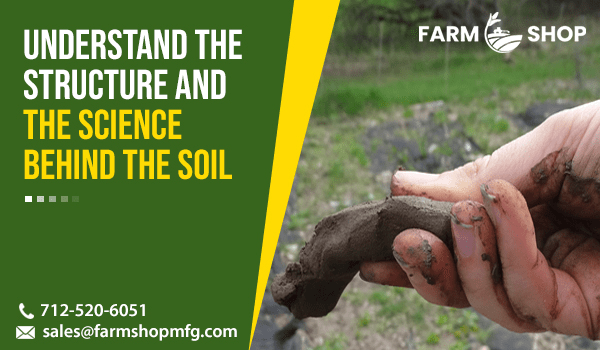 Understand the Structure and the Science behind the Soil

Even if the soil seems nice from the surface, it is far more complex and full of several substances along with the living organisms.  A fist full of soil consists not only the soil, but also some amount of silt, clay, and other organic matter as well as visible and non-visible living creatures.  When you use farming equipment,  you are ignorant of these facts about soil.

Aggregate stability of the soil

Soil that has poor aggregate stability can be swept away even with the wind or may lead to soil erosion with little rainfall.  As a result, over a period of time, the soil loses its nutrients, quality as well as productivity.  The grass is successful in holding the soil, but the tilled farm fields have poor aggregate stability.

In certain cases, the soil can be recovered by crop rotation and not disturbing the soil after one phase.

How to fix broken soil?

To fix the broken soil, leave a layer of crop residue that will add the component to the surface.  This helps in repairing the soil faster and enhancing water infiltration. As a result, the soil can develop better aggregate stability. It does not matter what type of soil you want to fix, as adding a layer of crop cover helps in boosting water infiltration as high as 59% when compared with the farmland that has no cover crops.  The positive results of crop cover can be noticed even after two years with the improvement in soil conditions.

However, not all soils are the same, as such every farmland has a different texture of soil with different soil aggregate stability.

Clay soils consist of small particles and they are able to form aggregates faster than other soils.

Silt loam soil consists of medium to small size particles and is able to hold a high amount of water.  This soil is soft and generally, takes less time to build soil aggregate stability than sandy soil.

On the other hand, sandy soil comes with large particles and requires the organic matter to build aggregate stability and bind the soil particles together.

Although there are commercially available soil labs that offer tests to find out the condition of the soil including the presence of fungi, microorganisms etc. however, the testings may be expensive and the farmers may not be able to interpret the results of the laboratory tests.  Alternatively, the farmers can watch out for these signs to find out the benefits of no or reduced tillage in the farmland whereby:

Farmers who have taken the step of no tillage have benefited from the improvement in the soil condition and structure in a span of few years.  The addition of cover crops can build the structure of the soil effectively. Moreover, farming equipment such as Germinator Closing Wheels that use Germinator Wheel Assembly can work efficiently on all types of soil and even in the no-till conditions of the soil.